FPC was included in the Register of Natural Monopolies.

FPC was awarded with the Company of the Year 2012 National Award by RosBusinessConsulting (RBC) information agency.

FPC was granted the observer status at the OSJD, enabling representation of the Company’s interests at meetings of OSJD’s working bodies, which reinforced the Company’s position in the international transport market.

Credit ratings were assigned to FPC by leading rating agencies.

FPC’s Annual Report won the Best Presentation of a Business Model by a Non-Public Company category at the Annual Report Competition by the Moscow Exchange.

A double-decker train seating 1,320 from Moscow to Voronezh was enteredi into the Russian Book of Records as “the year-round scheduled long-distance train with the most passenger seats”.

FPC’s Annual Report won the Best Presentation of a Business Model by a Non-Public Company category for the second time at the Annual Report Competition by the Moscow Exchange.

The Year of the Passenger Programme was successfully implemented: in 2016, FPC reversed its declining passenger rates for the first time in five years, achieving a growth of 4%.

FPC’s 2017 Annual Report was awarded the second prize in the Best Presentation of a Business Model by a Non-Public Company at the Annual Report Competition by the Moscow Exchange.

FPC won an award for promoting corporate volunteering, granted by the Volunteer Centres Association at the International Volunteer Forum.

Restructuring of long-distance rail passenger services was completed under Stage III of the Railway Restructuring Programme.

Regulatory and legal framework for calculating revenue shortfall was finalised.

The Plan to Develop and Implement a Mechanism for Long-Term Subsidising of Long-Distance Rail Passenger Transport was approved by instruction of the Russian Deputy Prime Minister Arkady Dvorkovich.

In accordance with Resolutions of the Russian Government No. 1223 dated 19 November 2014 and No. 1044 dated 11 October 2014, FPC was entitled to subsidies covering part of its interest expenses under loans granted to purchase rolling stock (double-decker carriages) and included as a beneficiary of the Programme to Support Investment Projects in Russia Based on Project Financing Arrangements.

The Russian Government resolved to reduce the VAT rate from 18% to 10% for long-distance rail passenger services between 1 January 2016 and 31 December 2017.

The Russian Government resolved to reduce the VAT rate for long-distance rail passenger services from 10% to 0% between 2017 and 2030.

The Federal Antimonopoly Service (FAS) of Russia agreed to reduce infrastructure tariffs for higher-speed trains travelling at 91 to 140 km/h.

The draft Development Strategy of JSC FPC to 2030 was prepared.

The VAT rate applicable to long-distance rail passenger services was reduced from 10% to 0% until 2030.

A federal law allowing carriers to sell non-refundable tickets was adopted on 18 April 2018 with effect from 1 January 2019.

Online registration was made available on all FPC’s domestic trains.

The Russian Railways website was modified to enable mobile sales of e-tickets for FPC’s trains.

A controlling share of LLC RZD Travel was acquired to expand FPC’s presence in the rail travel market.

The Development Strategy of JSC FPC to 2030 was approved.

Ticket sales on credit were launched.

Technology for including trains in the general turnaround schedule was expanded.

FPC-Logistics, a logistics subsidiary focused on unaccompanied baggage and mail transport, was established.

Car transporters were put into service.

A double-decker train was launched on the Moscow–Adler route.

A co-branded card was launched with Bank VTB 24 (PJSC).

A unified maintenance facility for double-decker rolling stock was launched at the Mineralnye Vody depot.

The procedure for e-ticket purchases and cancellations was simplified, and the English version of the website for ticket purchase was launched.

A pilot project on multimodal transport was implemented (Moscow–Valuyki).

The high-speed Strizh train made up of Talgo carriages was launched on the Moscow–Nizhny Novgorod route.

A double-decker train made up of carriages with seats was launched between Moscow and Voronezh.

Sales of e-tickets for multimodal routes were launched.

The new international Strizh train embarked on its first passenger journey from Moscow to Berlin with a travel time of 20 hours – a 4.5-hour reduction.

Booking windows for domestic trains were increased to 60 days.

Trains to resort destinations were accelerated.

Passengers were provided the option to use bank cards to pay for goods purchased on board all FPC trains.

Shower rooms were made available on 93 trains operated by FPC.

Over 3 million customers registered with the RZD Bonus Loyalty Programme of RZD Holding.

Booking windows for domestic trains were increased to 90 days.

The Russian Railways website launched sales of e-tickets for wheelchair users and their accompanying persons.

Sales of e-tickets for trains going to and from the Kaliningrad Region via Lithuania were launched on the Russian Railways website.

During the FIFA Confederations Cup 2017, 42 additional trains for 262 journeys were added to the schedule.

Free transport totalling 33% of all passenger seating was provided for 52,900 football fans, and additional stops were introduced at Vladimir and Tver.

FPC conducted its first Net Promoter Score (NPS) survey, with an overall score registered at 4.1 on a five-point scale.

Passenger km and the number of passengers carried increased by 6% and 8%, respectively, in 2018 – the largest year-on-year increases in FPC’s history.

A record high number of passenger carriage replacements and upgrades was conducted (a 70% increase year-on-year).

Over 4 million customers registered with the RZD Bonus Loyalty Programme of RZD Holding (a 35% increase year-on-year).

Further progress was made on new online passenger services such as electronic queue management at railway stations, refund notifications through a customer’s personal account on the Russian Railways website, e-ticket booking for subsidised categories of passengers on presenting coupons from the Social Insurance Fund.

The Russian Railways website was modified to enable the sale of electronic carriage documents for baggage, pets, and hand luggage on FPC’s trains.

During the 2018 FIFA World Cup Russia, free transport was provided for 318,900 football fans, with 734 journeys run by free trains across 31 routes.

Transporting fans by the Federal Passenger Company’s trains during the 2018 FIFA World Cup. 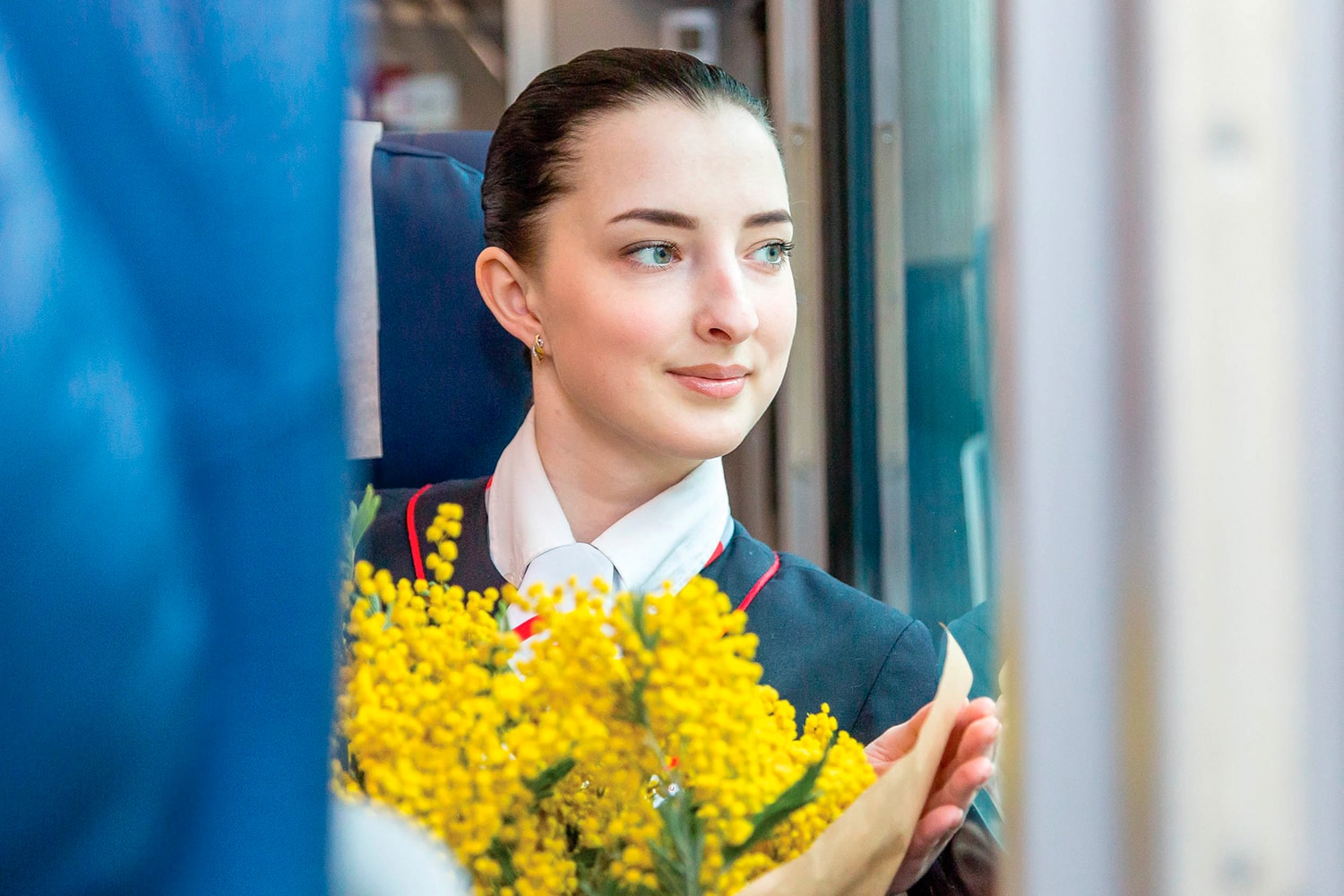 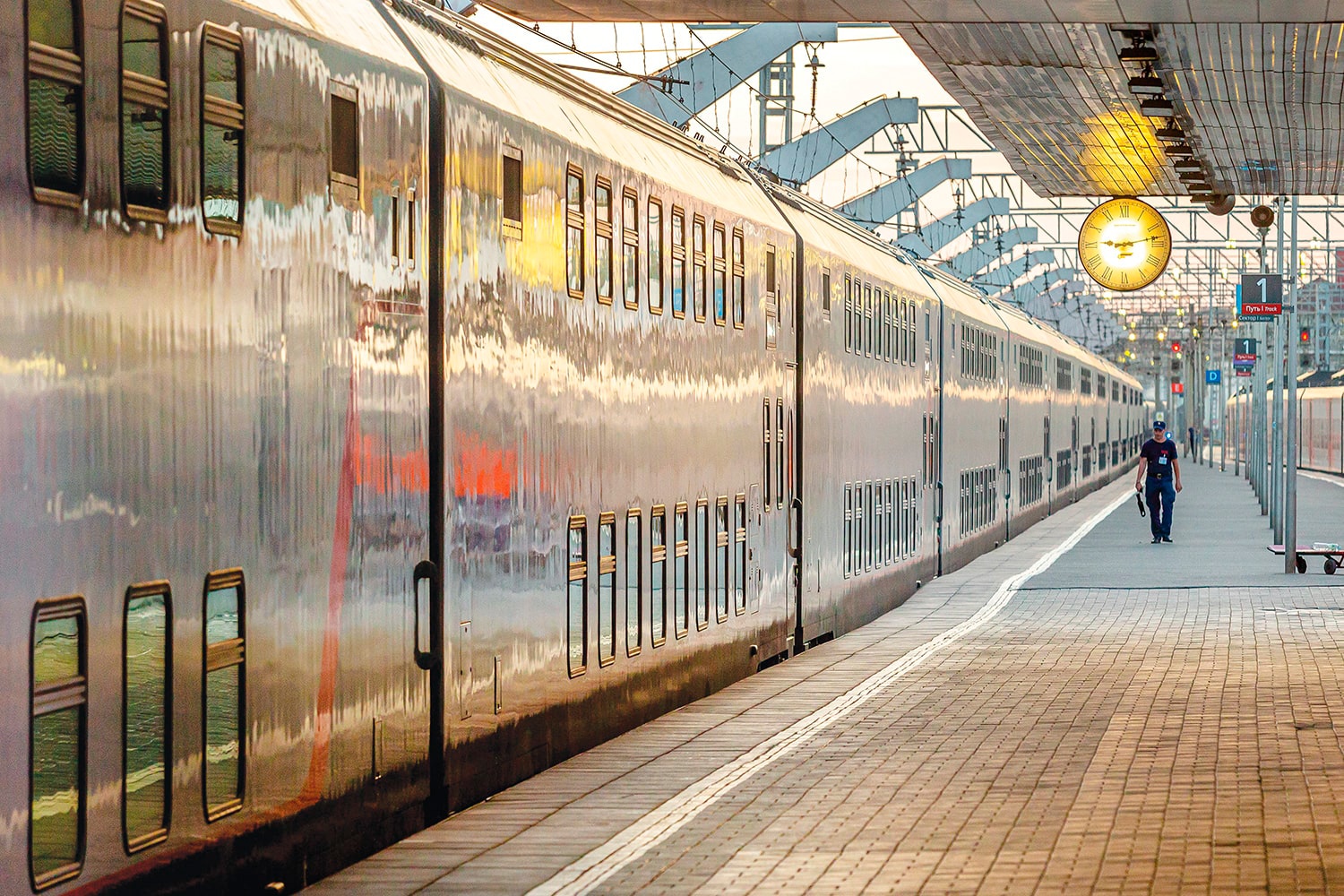 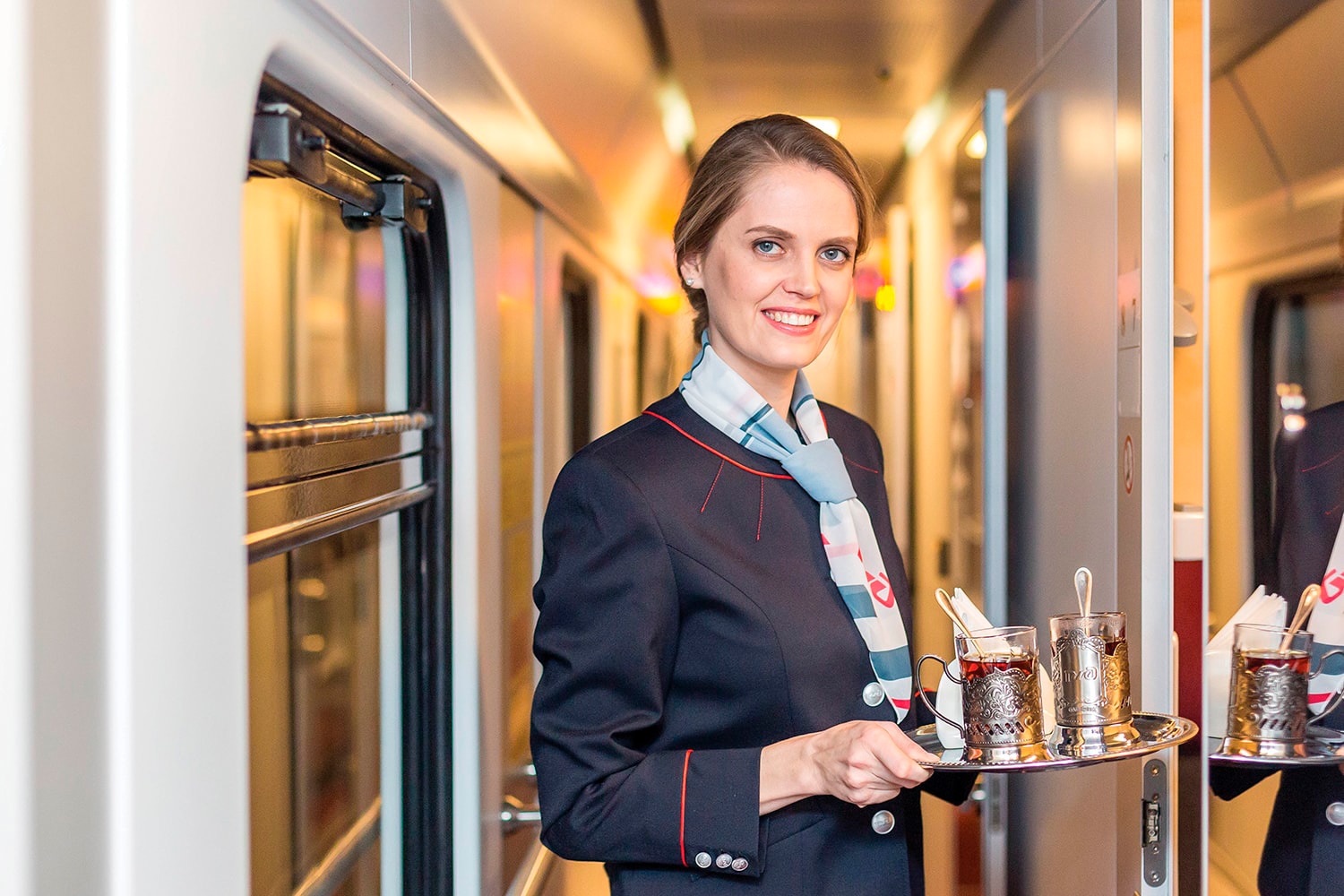