The fundamental advantage of a double-decker carriage is its increased passenger capacity allowing to carry more passengers on busy routes, especially to southern resorts.

Air conditioning and heating units in each carriage help constantly maintain a comfortable microclimate. Environmentally friendly toilet facilities with three cabins allow passengers to use toilets at stops and in resort areas. Slackless couplings and pressure-proof gangways helped reduce noise and vibration in carriages and increase the safety of passengers when moving from carriage to carriage. 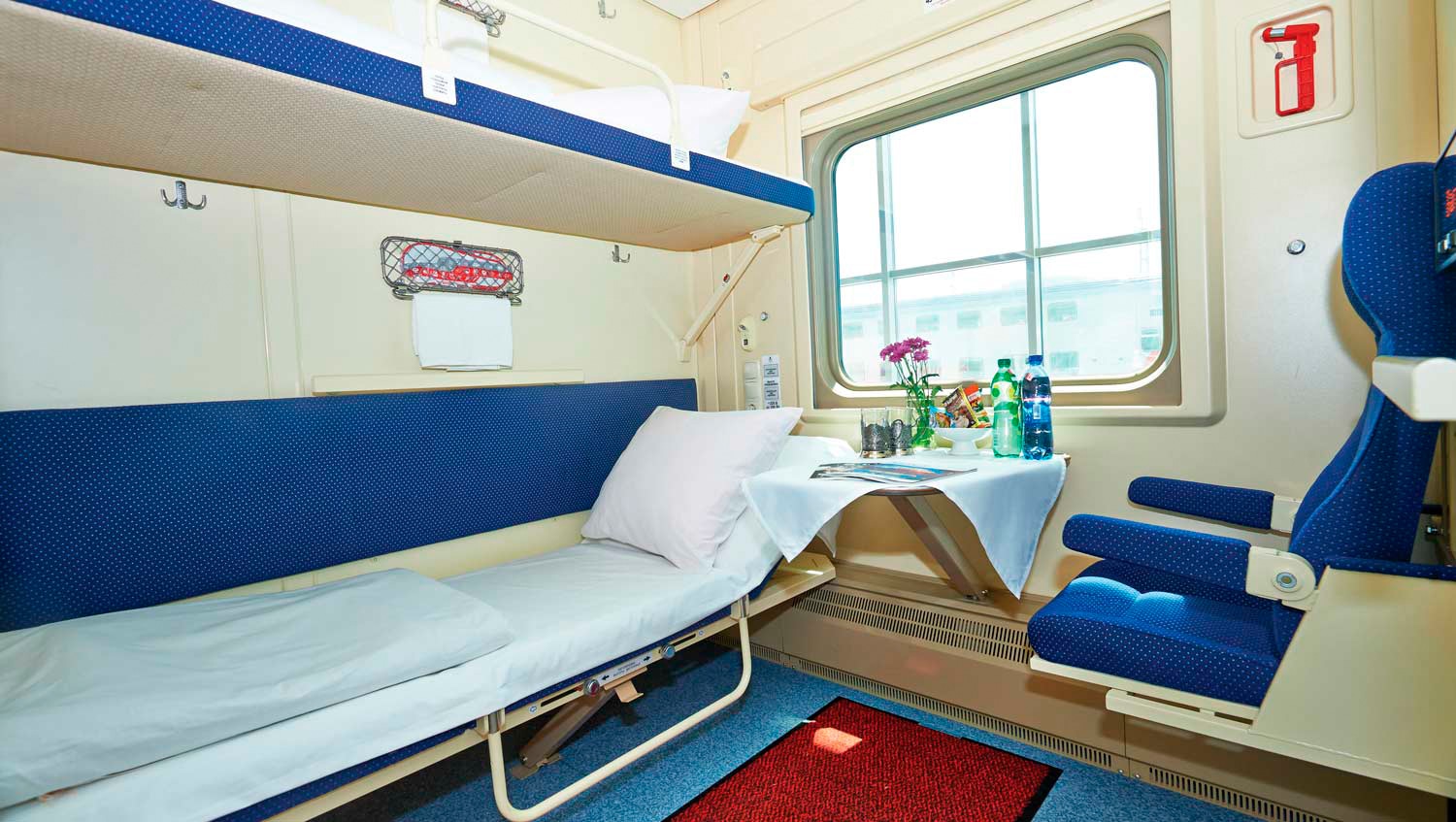 The demands of disabled persons have also been considered: one of the carriages in each train (administrative carriage) is equipped with special lifts for boarding wheelchair users from low platforms and has a special compartment and toilet.

In 2015, the Company additionally purchased 15 double-decker carriages with seats: ten with standard and five with improved interior.

A double-decker carriage with seats was designed in Russia using the latest technology, equipment, and materials, as well as advanced passenger carriage building expertise and know-how of TVZ. One of the key features of the new rolling stock is the change of the side wall shape and curved glass windows used for the first time in the history of Russian carriage building.

The carriage is equipped with new modern rigid slackless couplings and gangways which ensure safe and convenient move from carriage to carriage, protection of passengers and staff in gangways from noise, precipitation, dust, sudden temperature and pressure drops. For visually impaired passengers, all signage in carriages is duplicated in Braille.

Double-decker carriages with seats are operated on the Moscow–Voronezh route. 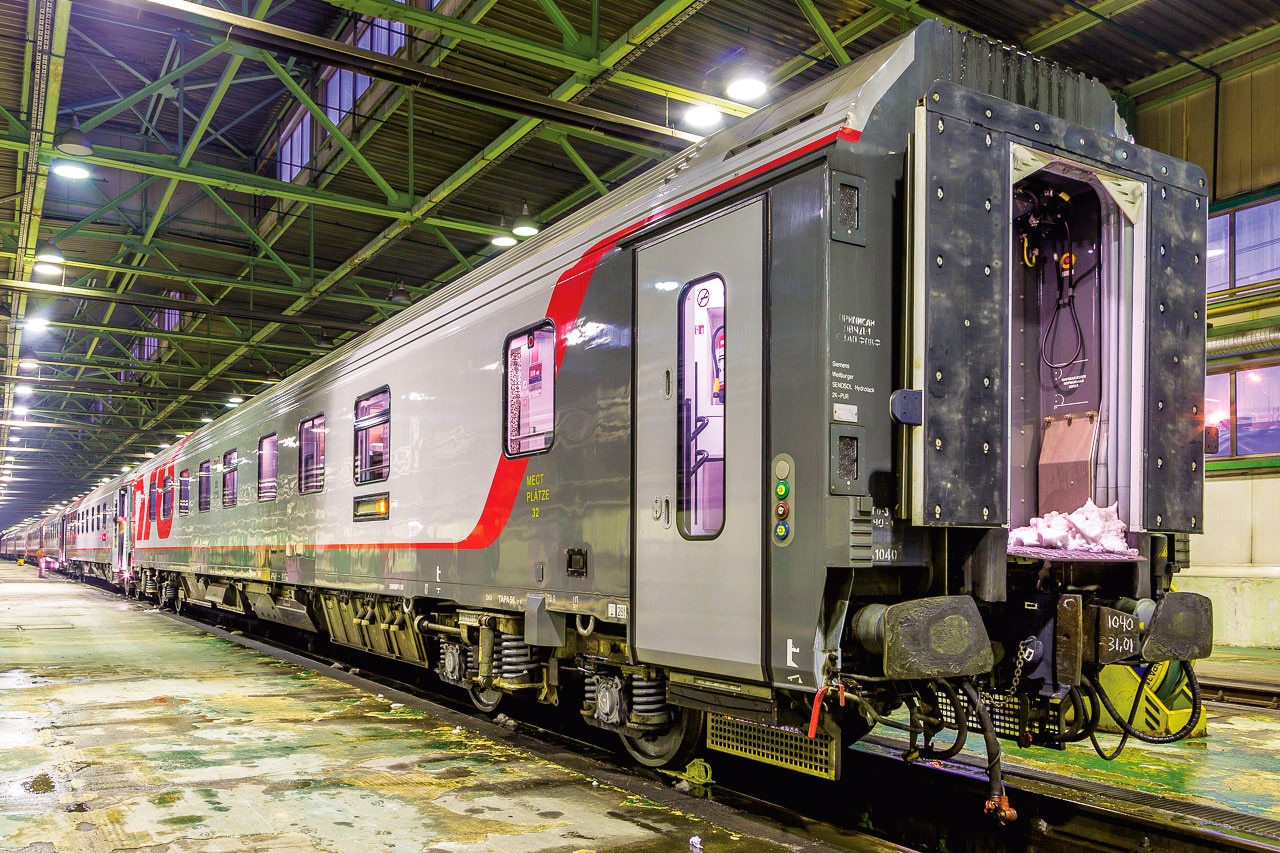 From 2012 to 2015, the Company purchased 200 RIC carriages to replace rolling stock on international routes.

The RIC sleeping carriage, model 61-4476 (WLABmz), is intended for international passenger services in the UIC countries (1,435 mm gauge), the European part of the Russian Federation, the CIS, and Baltic countries (1,520 mm gauge).

The carriage complies with mandatory standards of the Russian Federation (GOST, NB ZhT) and the European Community (TSI, EN, UIC) in terms of conception, as well as exterior and interior design.

Sliding doors separate carriage interior at both ends from vestibules. A similar door is installed between the sleeping compartments area and toilets.

The compartments have four berths that can be used as four conventional seats with headrests during the daytime and a folding table under the window with an integrated sink with hot and cold water, as well as a waste bin. The space under the lower berths can be used for storing luggage. 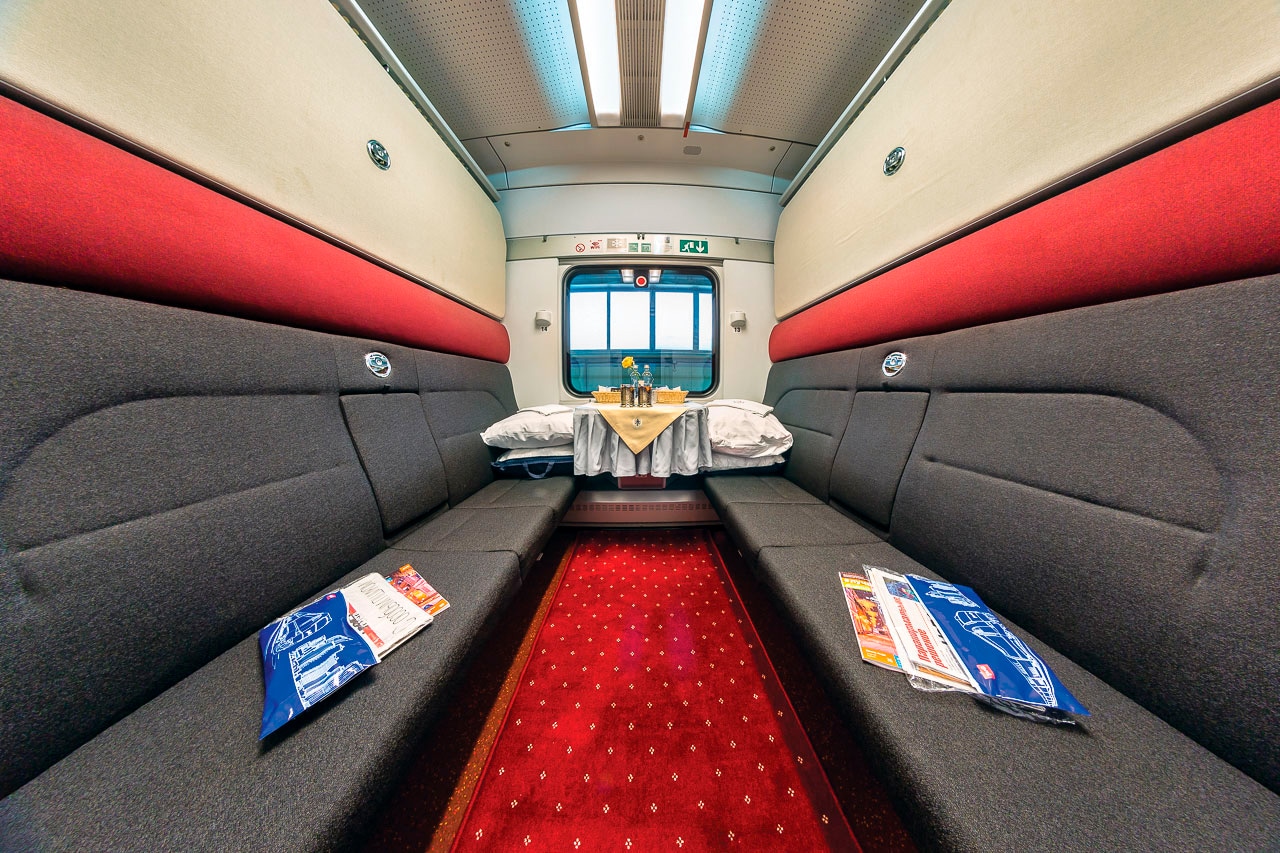 Each sleeping compartment has two power sockets to charge phones or laptops, a shelf for storing small items, bedside reading lights, hooks for clothes, a temperature control device of the climate system and an information system. The compartments are equipped with hinged doors.

Toilets are equipped with environmentally friendly closed loop vacuum facilities, as well as a washbasin with cold and hot water supply, a mirror, and an automatic soap dispenser. One of the toilets is equipped with a shower. 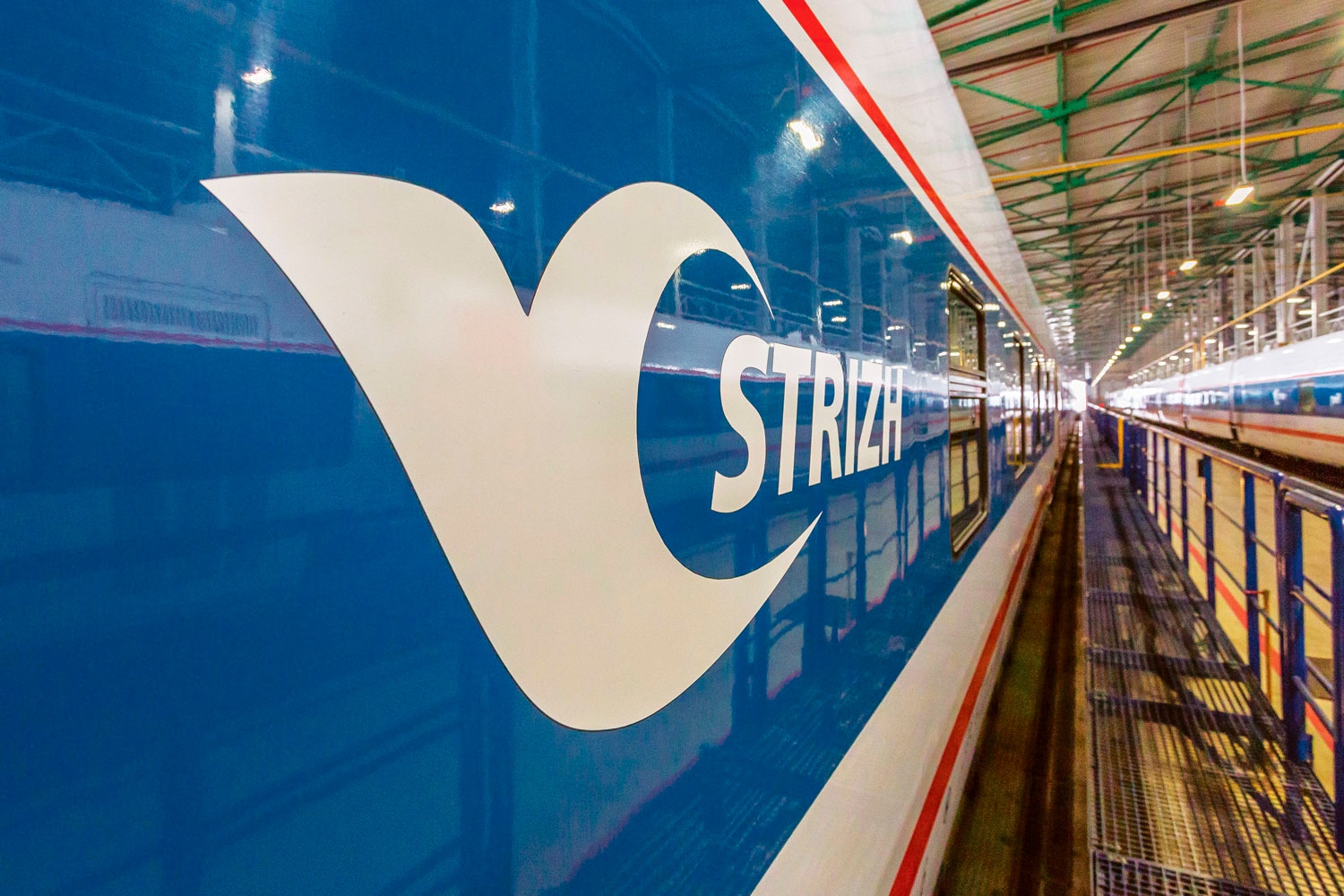 The Company has purchased 140 Talgo carriages since 2015.

The maximum speed of the trains in service is 200 km/h.

Due to their original design and technology solutions, passenger carriages by Patentes Talgo S.L. have several specific technical features, which significantly increase the average speed of the rolling stock on the existing track infrastructure, including:

The natural tilting system allows to increase the speed of the train on curved tracks, while reducing the negative impact of unbalanced lateral force on passenger comfort. 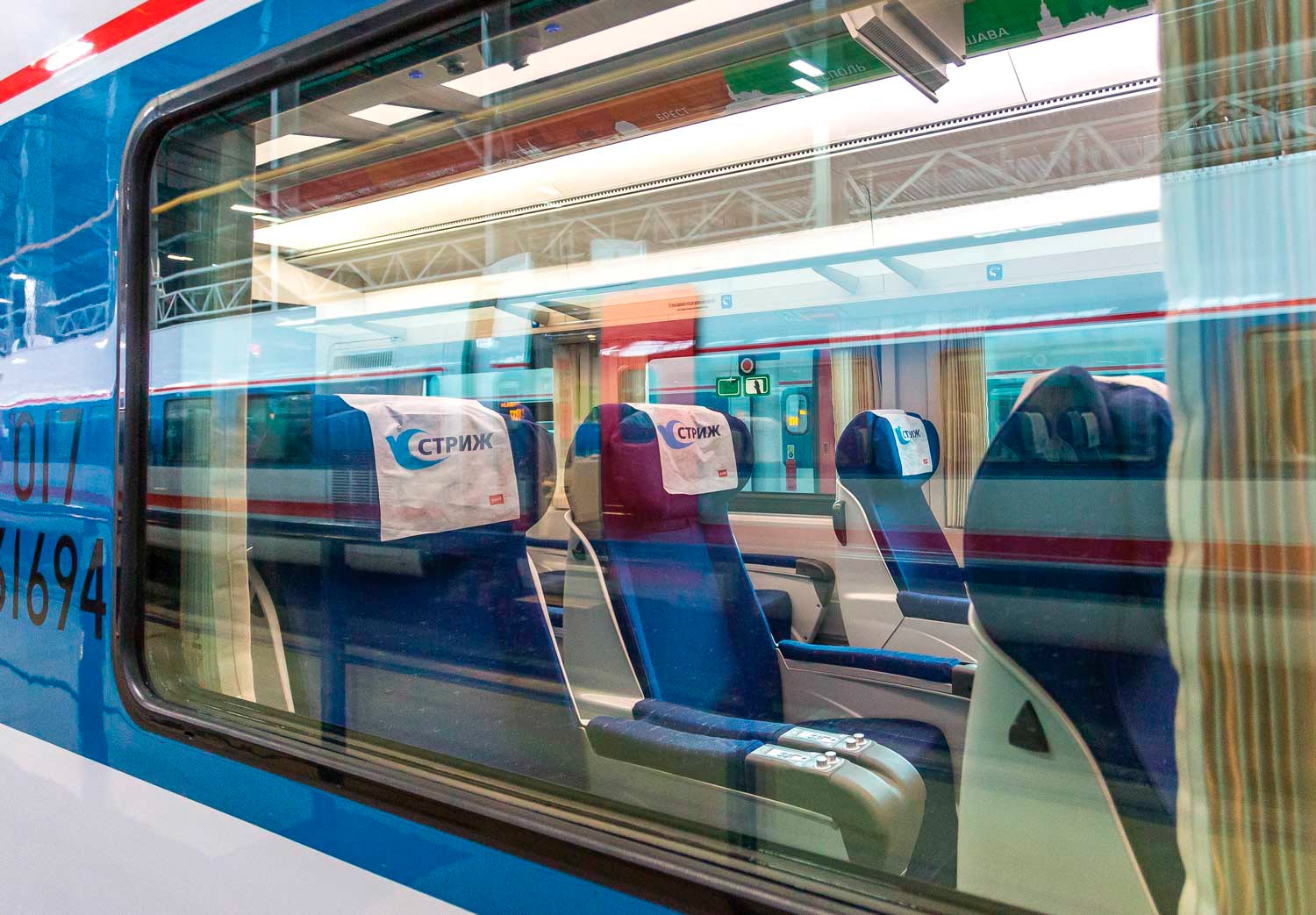 The system for radial positioning of trucks in curves allows to increase the service life of running gear while reducing rail wear.

The use of air suspension in conjunction with the natural tilting system and the system for radial positioning of trucks in curves provides soft riding and, thereby, significantly improves the passenger comfort.

To continuously diagnose the most safety-critical systems, the train is equipped with an automatic monitoring system allowing to monitor the brake system parameters (including antiskid device), and the operation of the climate system, electrical equipment, safety systems, fire alarm, fire extinguishing system, etc.

The Moscow–Berlin train does not need bogie exchange to operate on the European track gauge, which allows to reduce travel time significantly.